TAL effector DNA-binding domain
TAL effectors are proteins that are secreted by Xanthomonas bacteria. The DNA binding domain contains a repeated highly conserved 33–34 amino acid sequence with divergent 12th and 13th amino acids. These two positions, referred to as the Repeat Variable Diresidue (RVD), are highly variable and show a strong correlation with specific nucleotide recognition. This relationship between amino acid sequence and DNA recognition has allowed for the engineering of specific DNA-binding domains by selecting a combination of repeat segments containing the appropriate RVDs.

DNA cleavage domain
The non-specific DNA cleavage domain from the end of the FokI endonuclease can be used to construct hybrid nucleases that are active in many different cell types. The FokI domain functions as a dimer, requiring two constructs with unique DNA binding domains for sites in the target genome with proper orientation and spacing. Both the number of amino acid residues between the TALE DNA binding domain and the FokI cleavage domain and the number of bases between the two individual TALEN binding sites appear to be important parameters for achieving high levels of activity. 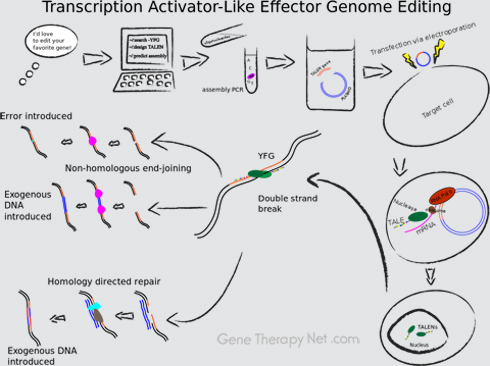 Figure 1. Workflow of genome editing of Your Favorite Gene (YFG) using TALEN technology. The targent sequence is identified, a corresponding TALEN sequence is engineered and inserted into a plasmid. The plasmid is inserted into the target cell where it is translated to produce the functional TALEN, which enters the nucleus and binds and cleaves the target sequence. Depending on the application, this can be used to introduce an error (to knock out a target gene) or to introduce a new DNA sequence into the target gene.


TALEN mechanism
The simple relationship between amino acid sequence and DNA recognition of the TALE binding domain allows for the efficient engineering of proteins. Once the TALEN constructs have been assembled, they are inserted into plasmids; the target cells are then transfected with the plasmids, and the gene products are expressed and enter the nucleus to access the genome. Alternatively, TALEN constructs can be delivered to the cells as mRNAs, which removes the possibility of genomic integration of the TALEN-expressing protein. Using an mRNA vector can also dramatically increase the level of homology directed repair (HDR) and the success of introgression during gene editing.

TALEN technology can be used to edit genomes by inducing double-strand breaks (DSB), which cells respond to with repair mechanisms. Non-homologous end joining (NHEJ) reconnects DNA from either side of a double-strand break where there is very little or no sequence overlap for annealing. This repair mechanism induces errors in the genome via insertion or deletion, or chromosomal rearrangement; any such errors may render the gene products coded at that location non-functional. Because this activity can vary depending on the species, cell type, target gene, and nuclease used, it should be monitored when designing new systems. Alternatively, DNA can be introduced into a genome through NHEJ in the presence of exogenous double-stranded DNA fragments. Homology directed repair can also introduce foreign DNA at the DSB as the transfected double-stranded sequences are used as templates for the repair enzymes

Gene Therapy Application
TALEN technology has been used for instance to efficiently engineer stably modified human embryonic stem cell and induced pluripotent stem cell (IPSCs) clones and human erythroid cell lines. The technology has also been utilized experimentally to correct the genetic errors that underlie disease. For example, it has been used in vitro to correct the genetic defects that cause disorders such as sickle cell disease, xeroderma pigmentosum, and epidermolysis bullosa. It was also shown that TALEN technology can be used as tools to harness the immune system to fight cancers. In theory, the genome-wide specificity of engineered TALEN fusions allows for correction of errors at individual genetic loci via homology-directed repair from a correct exogenous template. In reality, however, the in situ application of TALEN® technology is currently limited by the lack of an efficient delivery mechanism, unknown immunogenic factors, and uncertainty in the specificity of TALEN binding. Another emerging application of TALEN® technology is its ability to combine with other genome engineering tools, such as meganucleases. The DNA binding region of a TAL effector can be combined with the cleavage domain of a meganuclease to create a hybrid architecture combining the ease of engineering and highly specific DNA binding activity of a TAL effector with the low site frequency and specificity of a meganuclease.

In 2015, Physicians at the Great Ormond Street Hospital announced the first clinical use of TALEN-based genome editing. An 11-month old baby suffering from CD19+ acute lymphoblastic leukemia was treated with modified donor T cells that had been engineered to attack leukemia cells, to be resistant to Alemtuzumab, and to evade detection by the host immune system after introduction. A few weeks after therapy, the patient's condition improved; though physicians are cautious, the patient has been in remission for several months following treatment.