Zinc-finger nucleases (ZFNs) are artificial restriction enzymes generated by fusing a zinc finger DNA-binding domain to a DNA-cleavage domain. Zinc finger domains can be engineered to target specific desired DNA sequences and this enables zinc-finger nucleases to target unique sequences within complex genomes. By taking advantage of endogenous DNA repair machinery, these reagents can be used to precisely alter the genomes of higher organisms. Alongside Cas9 and TALEN proteins, ZFN is becoming a prominent tool in the field of genome editing.

A zinc finger nuclease is a site-specific endonuclease designed to bind and cleave DNA at specific positions (see figure 1 and video 1). There are two protein domains. The first domain is the DNA binding domain, which consists of eukaryotic transcription factors and contain the zinc finger. The second domain is the nuclease domain, which consists of the FokI restriction enzyme and is responsible for the catalytic cleavage of DNA.

DNA-binding domain
The DNA-binding domains of individual ZFNs typically contain between three and six individual zinc finger repeats and can each recognize between 9 and 18 basepairs. If the zinc finger domains are perfectly specific for their intended target site then even a pair of 3-finger ZFNs that recognize a total of 18 basepairs can, in theory, target a single locus in a mammalian genome. The most straightforward method to generate new zinc-finger arrays is to combine smaller zinc-finger "modules" of known specificity. The most common modular assembly process involves combining three separate zinc fingers that can each recognize a 3 basepair DNA sequence to generate a 3-finger array that can recognize a 9 basepair target site. 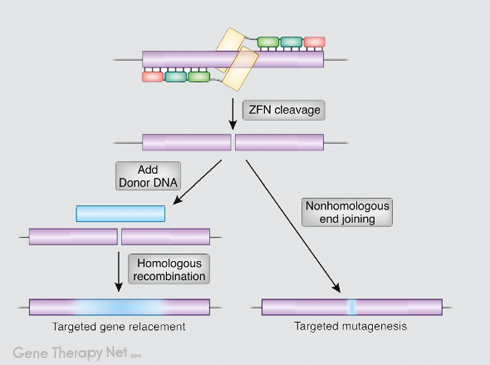 Figure 1. A pair of ZFNs, each with three zinc fingers binding to target DNA, are shown introducing a double-strand break, at the FokI domain, depicted in yellow. Subsequently, the double strand break is shown as being repaired through either homology-directed repair or non-homologous end joining.


Gene Therapy Application
Zinc finger nucleases are useful to manipulate the genomes of many plants and animals. ZFNs are also used to create a new generation of genetic disease models called isogenic human disease models. Zinc finger nucleases have also been used in a clinical trial of CD4+ human T-cells with the CCR5 gene disrupted by zinc finger nucleases to be save as a potential treatment for HIV/AIDS. Custom-designed ZFNs that combine the non-specific cleavage domain (N) of FokI endonuclease with zinc-finger proteins (ZFPs) offer a general way to deliver a site-specific DSB to the genome, and stimulate local homologous recombination by several orders of magnitude. This makes targeted gene correction or genome editing a viable option in human cells. Since ZFN-encoding plasmids could be used to transiently express ZFNs to target a DSB to a specific gene locus in human cells, they offer an excellent way for targeted delivery of the therapeutic genes to a pre-selected chromosomal site. The ZFN-encoding plasmid-based approach has the potential to circumvent all the problems associated with the viral delivery of therapeutic genes. The first therapeutic applications of ZFNs are likely to involve ex vivo therapy using a patients own stem cells. After editing the stem cell genome, the cells could be expanded in culture and reinserted into the patient to produce differentiated cells with corrected functions. The initial targets will likely include the causes of monogenic diseases such as the IL2Rγ gene and the b-globin gene for gene correction and CCR5 gene for mutagenesis and disablement.

Potential side effects
If the zinc finger domains are not specific enough for their target site or they do not target a unique site within the genome of interest, off-target cleavage may occur. Such off-target cleavage may lead to the production of enough double-strand breaks to overwhelm the repair machinery and, as a consequence, yield chromosomal rearrangements and/or cell death. Off-target cleavage events may also promote random integration of donor DNA. As with many foreign proteins inserted into the human body, there is a risk of an immunological response against the therapeutic agent and the cells in which it is active. Since the protein will need to be expressed only transiently, however, the time over which a response may develop is short.