Glybera (Alipogene tiparvovec) is a gene therapy treatment designed to reverse lipoprotein lipase deficiency (LPLD), a rare inherited disorder which can cause severe pancreatitis. Glybera is composed of an adeno-associated virus serotype 1 (AAV1) viral vector with an intact copy of the human lipoprotein lipase (LPL) gene for delivery to muscle cells. Data from the clinical trials indicates that fat concentrations in blood were reduced between 3 and 12 weeks after injection, in nearly all patients.

In July 2012, the European Medicines Agency (EMA) recommended it for approval (the first recommendation for a gene therapy treatment in either Europe or the United States), and the recommendation was endorsed by the European Commission in November 2012. Glybera was developed over a period of decades by researchers at the University of British Columbia and later Amsterdam Molecular Therapeutics (AMT), which acquired rights to with the aim of releasing the drug in Europe. After spending millions of euros on Glybera's approval, AMT went bankrupt and its assets were acquired by uniQure. Glybera gained infamy as the "million-dollar drug," causing its manufacturer, uniQure, to remove the drug after two years on the European market. As of 2018, only 31 people worldwide have ever been administered Glybera, and uniQure has no plans to sell the drug in the US or Canada. 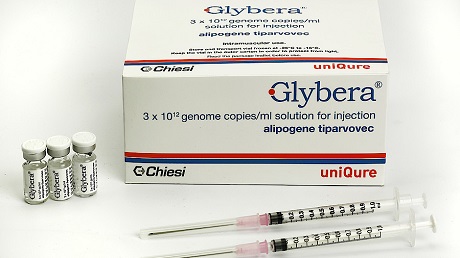