Adenoviruses are medium-sized (90–100 nm), nonenveloped (naked) icosahedral viruses composed of a nucleocapsid and a double-stranded linear DNA genome. There are over 51 different serotypes in humans, which are responsible for 5–10% of upper respiratory infections in children, and many infections in adults as well. When these viruses infect a host cell, they introduce their DNA molecule into the host. The genetic material of the adenoviruses is not incorporated (transient) into the host cell's genetic material. The DNA molecule is left free in the nucleus of the host cell, and the instructions in this extra DNA molecule are transcribed just like any other gene. The only difference is that these extra genes are not replicated when the cell is about to undergo cell division so the descendants of that cell will not have the extra gene.

As a result, treatment with the adenovirus will require readministration in a growing cell population although the absence of integration into the host cell's genome should prevent the type of cancer seen in the SCID trials. This vector system has shown real promise in treating cancer and indeed the first gene therapy product (Gendicine) to be licensed is an adenovirus to treat cancer.

Viruses of the family Adenoviridae infect various species of animals, including humans. Adenoviruses were first isolated in human adenoids (tonsils), from which the name is derived. Adenoviruses represent the largest nonenveloped viruses, because they are the maximum size able to be transported through the endosome (i.e. envelope fusion is not necessary). The virion also has a unique "spike" or fiber associated with each penton base of the capsid (see picture below) that aids in attachment to the host cell via the coxsackie-adenovirus receptor on the surface of the host cell (see figure 1). 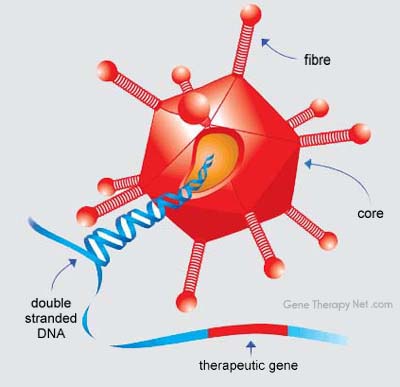 Adenoviruses are primarily spread via respiratory droplets, however they can also be spread by fecal routes as well. Most infections with adenovirus result in infections of the upper respiratory tract. Adenovirus infections often show up as conjunctivitis, tonsilitis, an ear infection, or croup. Adenoviruses can also cause gastroenteritis (stomach flu). A combination of conjunctivitis and tonsilitis is particularly common with adenovirus infections. Some children can develop adenovirus bronchiolitis or pneumonia, both of which can be severe. In babies, adenoviruses can also cause coughing fits that look almost exactly like whooping cough.

Entry of adenoviruses into the host cell involves two sets of interactions between the virus and the host cell. Entry into the host cell is initiated by the knob domain of the fiber protein binding to the cell receptor. The two currently established receptors are: CD46 for the group B human adenovirus serotypes and the coxsackievirus adenovirus receptor (CAR) for all other serotypes. This is followed by a secondary interaction, where a specialized motif in the penton base protein interacts with an integrin molecule. It is the co-receptor interaction that stimulates internalization of the adenovirus. This co-receptor molecule is αv integrin. Binding to αv integrin results in endocytosis of the virus particle via clathrin-coated pits. Attachment to αv integrin stimulates cell signaling and thus induces actin polymerization resulting in entry of the virion into the host cell within an endosome.

Once the virus has successfully gained entry into the host cell the endosome acidifies, which alters virus topology by causing capsid components to disassociate. These changes as well as the toxic nature of the pentons results in the release of the virion into the cytoplasm. With the help of cellular microtubules the virus is transported to the nuclear pore complex whereby the adenovirus particle disassembles. Viral DNA is subsequently released which can enter the nucleus via the nuclear pore. After this the DNA associates with histone molecules. Thus viral gene expression can occur and new virus particles can be generated.


The adenovirus life cycle is separated, by the DNA replication process, into two phases: an early and a late phase. In both phases a primary transcript is generated which is alternatively spliced to generate monocistronic mRNAs compatible with the host’s ribosome, allowing for the products to be translated. The early genes are responsible for expressing mainly non-structural, regulatory proteins (see figure 2). The goal of these proteins is threefold: to alter the expression of host proteins that are necessary for DNA synthesis; to activate other virus genes (such as the virus-encoded DNA polymerase); and to avoid premature death of the infected cell by the host-immune defenses (blockage of apoptosis, blockage of interferon activity, and blockage of MHC class I translocation and expression).

Some adenoviruses under specialized conditions can transform cells using their early gene products. E1a (binds Retinoblastoma tumor suppressor protein) has been found to immortalize primary cells in vitro allowing E1b (binds p53 tumor suppressor) to assist and stably transform the cells. Nevertheless, they are reliant upon each other to successfully transform the host cell and form tumors. DNA replication separates the early and late phases. Once the early genes have liberated adequate virus proteins, replication machinery and replication substrates, replication of the adenovirus genome can occur. A terminal protein that is covalently bound to the 5’ end of the adenovirus genome acts as a primer for replication. The viral DNA polymerase then uses a strand displacement mechanism, as opposed to the conventional Okazaki fragments used in mammalian DNA replication, to replicate the genome.

The late phase of the adenovirus life cycle is focused on producing sufficient quantities of structural protein to pack all the genetic material produced by DNA replication. Once the viral components have successfully been replicated the virus is assembled into its protein shells and released from the cell as a result of virally induced cell lysis. 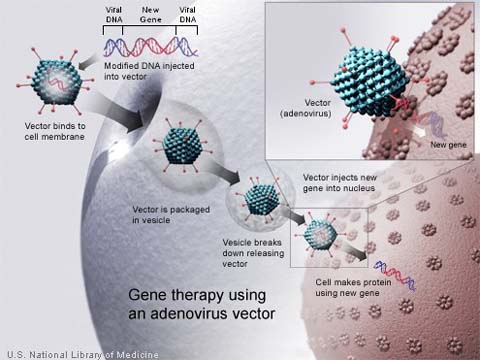 In September, 1999, the gene therapy research community was alerted to the report of the death of a man enrolled in a gene transfer trial at the University of Pennsylvania. The Recombinant DNA Advisory Committee has published a review which involves a discussion of the preclinical safety data, the design of the protocol, the informed consent document, and any overarching scientific, safety, or ethical issues relevant to the specific protocol. The review entitled "Assessment of Adenoviral Vector Safety and Toxicity: Report of the National Institutes of Health Recombinant DNA Advisory Committee" was published in Human Gene Therapy in 2002.