Alphaviruses, like Sindbis Virus and Semliki Forest Virus, belong to the Togaviridae family of viruses. There are 27 alphaviruses, able to infect various vertebrates such as humans, rodents, birds, and larger mammals such as horses as well as invertebrates. Alphaviruses particles are enveloped have a 70 nm diameter, tend to be spherical and have a 40 nm isometric nucleocapsid. 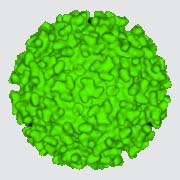 Of particular interest are the chimeric viruses that may be formed with alphaviral envelopes and retroviral capsids. Such chimeras are termed pseudotyped viruses. Alphaviral envelope pseudotypes of retroviruses or lentiviruses are able to integrate the genes that they carry into the expansive range of potential host cells that are recognized and infected by the alphaviral envelope proteins E2 and E1. The stable integration of viral genes is mediated by the retroviral interiors of these vectors.

There are limitations to the use of alphaviruses in the field of gene therapy due to their lack of targeting, however, through the introduction of variable antibody domains in a non-conserved loop in the structure of E2, specific populations of cells have been targeted. Furthermore, the use of whole alphaviruses for gene therapy is of limited efficacy both because several internal alphaviral proteins are involved in the induction of apoptosis upon infection and also because the alphaviral capsid mediates only the transient introduction of mRNA into host cells. Neither of these limitations extend to alphaviral envelope pseudotypes of retroviruses or lentiviruses.

Another branch of research involving alphaviruses is in vaccination. Alphaviruses are apt to be engineered to create replicon vectors which efficiently induce humoral and T-cell immune responses. They could therefore be used to vaccinate against viral, bacterial, protozoan, and tumor antigens.