Herpes simplex viruses (HSV) belong to the subfamily of Alphaherpesvirinae. Herpes viruses consists of a relatively large linear DNA genome of double-stranded DNA 150 kb in length, encased within an icosahedral protein cage called the capsid, which is wrapped in a lipid bilayer called the envelope. The envelope is joined to the capsid by means of a tegument. This complete particle is known as the virion. The genome of Herpes viruses encodes some 100-200 genes. These genes encode a variety of proteins involved in forming the capsid, tegument and envelope of the virus, as well as controlling the replication and infectivity of the virus.

Herpes simplex virus 1 and 2 (HSV-1 and HSV-2) are two species of the herpes virus family, which cause infections in humans. An infection by a herpes simplex virus is marked by watery blisters in the skin or mucous membranes of the mouth, lips or genitals. The genomes of HSV-1 and HSV-2 are complex, and contain two unique regions called the long unique region (UL) and the short unique region (US). Of the 74 known ORFs, UL contains 56 viral genes, whereas US contains only 12. Transcription of HSV genes is catalyzed by RNA polymerase II of the infected host. Immediate early genes, which encode proteins that regulate the expression of early and late viral genes, are the first to be expressed following infection. Early gene expression follows, to allow the synthesis of enzymes involved in DNA replication and the production of certain envelope glycoproteins. Expression of late genes occurs last, this group of genes predominantly encode proteins that form the virion particle. 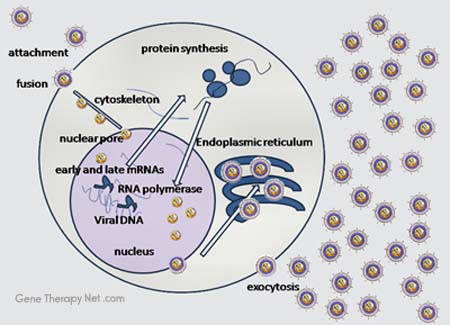 The sequential stages of HSV entry are analogous to those of other viruses. At first, complementary receptors on the virus and the cell surface bring the viral and cell membranes into proximity. In an intermediate state, the two membranes begin to merge, forming a hemifusion state. Finally, a stable entry pore is formed through which the viral envelope contents are introduced to the host cell. In the case of a herpes virus, initial interactions occur when a viral envelope glycoprotein called glycoprotein C (gC) binds to a cell surface particle called heparan sulfate. A second glycoprotein, glycoprotein D (gD), binds specifically to a receptor called the Herpes virus entry mediator receptor (HVEM) and provides a strong, fixed attachment to the host cell. These interactions bring the membrane surfaces into mutual proximity and allow for other glycoproteins embedded in the viral envelope to interact with other cell surface molecules. Once bound to the HVEM, gD changes its conformation and interacts with viral glycoproteins H (gH) and L (gL), which form a complex. The interaction of these membrane proteins results in the hemifusion state. Afterward, gB interaction with the gH/gL complex creates an entry pore for the viral capsid. Glycoprotein B interacts with glycosaminoglycans on the surface of the host cell.

Following infection of a cell, herpes virus proteins, called immediate-early, early, and late, are produced. The early proteins transcribed are used in the regulation of genetic replication of the virus. On entering the cell, an α-TIF protein joins the viral particle and aids in immediate-early transcription. The virion host shutoff protein (VHS or UL41) is very important to viral replication. This enzyme shuts off protein synthesis in the host, degrades host mRNA, helps in viral replication, and regulates gene expression of viral proteins. The viral genome immediately travels to the nucleus but the VHS protein remains in the cytoplasm.

The late proteins are used in to form the capsid and the receptors on the surface of the virus. Packaging of the viral particles - including the genome, core and the capsid - occurs in the nucleus of the cell. Here, concatemers of the viral genome are separated by cleavage and are placed into pre-formed capsids. HSV-1 undergoes a process of primary and secondary envelopment. The primary envelope is acquired by budding into the inner nuclear membrane of the cell. This then fuses with the outer nuclear membrane releasing a naked capsid into the cytoplasm. The virus acquires its final envelope by budding into cytoplasmic vesicles.

HSV may persist in a quiescent but persistent form known as latent infection, notably in neural ganglia.During latent infection of a cell, HSV express Latency Associated Transcript (LAT) RNA. LAT is known to regulate the host cell genome and interferes with natural cell death mechanisms. By maintaining the host cells, LAT expression preserves a reservoir of the virus, which allows later recurrences to produce further infections.

A protein found in neurons may bind to herpes virus DNA and regulate latency. Herpes virus DNA contains a gene for a protein called ICP4, which an important transactivator of genes associated with lytic infection in HSV-1.Elements surrounding the gene for ICP4 bind a protein known as the human neuronal protein Neuronal Restrictive Silencing Factor (NRSF) or human Repressor Element Silencing Transcription Factor (REST). When bound to the viral DNA elements, histone deacytalization occurs atop the ICP4 gene sequence to prevent initiation of transription from this gene, thereby preventing transcription of other viral genes involved in the lytic cycle. Another HSV protein reverses the inhibition of ICP4 protein synthesis. ICP0 dissociates NRSF from the ICP4 gene and thus prevents silencing of the viral DNA. The virus can be reactivated by other illnesses such as cold and influenza, eczema, emotional and physical stress, exposure to bright sunlight, gastric upset, fatigue or injury, and menstruation.

Herpes viruses are currently used as gene transfer vectors due to their specific advantages over other viral vectors. Among the unique features of HSV derived vectors are the very high transgenic capacity of the virus particle allowing to carry long sequences of foreign DNA, the genetic complexity of the virus genome, allowing to generate many different types of attenuated vectors possessing oncolytic activity, and the ability of HSV vectors to invade and establish lifelong non-toxic latent infections in neurons from sensory ganglia from where transgenes can be strongly and long-term expressed. Three different classes of vectors can be derived from HSV: replication-competent attenuated vectors, replication-incompetent recombinant vectors and defective helper-dependent vectors known as amplicons. Replication-defective HSV vectors are made by the deletion of one or more immediate-early genes, e.g. ICP4, which is then provided in trans by a complementing cell line. Oncolytic HSV vectors are promising therapeutic agents for cancer. Such HSV based vectors have been tested in glioma, melanoma and ovarian cancer patients.