Lentivirus is a genus of the Retroviridae family, characterized by a long incubation period. Lentiviruses can deliver a significant amount of genetic information into the DNA of the host cell, so they are one of the most efficient methods of a gene delivery vector. HIV, SIV, and FIV are all examples of lentiviruses.

Lentivirus is primarily a research tool used to introduce a gene product into in vitro systems or animal models. Large-scale collaborative efforts are underway to use lentiviruses to block the expression of a specific gene using RNA interference technology in high-throughput formats. The expression of short-hairpin RNA (shRNA) reduces the expression of a specific gene, thus allowing researchers to examine the necessity and effects of a given gene in a model system. These studies can be a precursor to the development of novel drugs which aim to block a gene-product to treat a disease.

Another common application is to use a lentivirus to introduce a new gene into human or animal cells. For example, a model of mouse hemophillia is corrected by expressing wild-type platlet-factor VIII, the gene that is mutated in human hemophillia. Lentiviral infection have advantages over other gene therapy methods including high-efficiency infection of dividing and non-dividing cells, long-term stable expression of a transgene, and low immunogenicity. Lentiviruses have also been successfully used for transfection of diabetic mice with the gene encoding PDGF (platelet-derived growth factor), a therapy being considered for use in humans. These treatments, like most current gene therapy experiments, show promise but are yet to be established as safe and effective in controlled human studies. 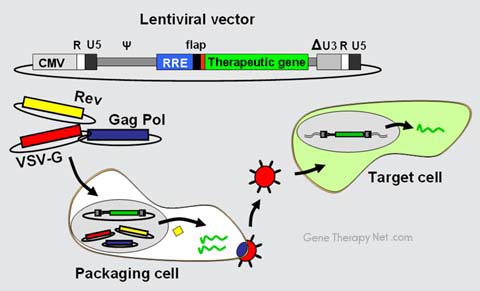 Infectious lentiviruses have three main genes coding for the viral proteins in the order: 5´-gag-pol-env-3´ (see figure 2). There are additional genes (also called accessory genes) depending on the virus (e.g., for HIV-1: vif, vpr, vpu, tat, rev, nef) whose products are involved in regulation of synthesis and processing viral RNA and other replicative functions. The LTR is about 600nt long, of which the U3 region is 450, the R sequence 100 and the U5 region some 70 nt long.


Viral proteins involved in early stages of replication include Reverse Transcriptase and Integrase. Reverse Transcriptase (RT) is the virally encoded RNA-dependent DNA polymerase. The enzyme uses the viral RNA genome as a template for the synthesis of a complementary DNA copy. RT also has RNaseH activity for destruction of the RNA-template. Integrase (IN) binds both the viral cDNA generated by RT and the host DNA. Processing of the LTR by IN is performed prior to insertion of the viral genome into the host DNA. Although transmission is generally via infectious particles, lentiviruses are capable of infecting neighboring cells in direct contact with the host cells, without having to form extracellular particles.

The first clinical trial using a lentivial vector was conducted in 2005 (see article in Human Gene Therapy 2005; 16(1): 17-25). The use of lentiviral vectors has been increasing because the vector system has several attractive features as outlined above. In response to these developments, the Recombinant DNA Advisory Committee has developed guidance (Biosafety Considerations for Research with Lentiviral Vectors) on how to conduct a risk assessment for lentiviral vector research.